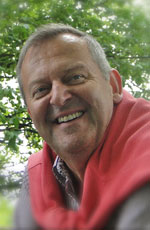 Philip Martin combines a busy solo performing career with that of a composer and teacher. It is these three elements of his musical personality that make him such a force in musical life today.

Born in Dublin, he studied with Mabel Swainson before winning an Associated Board scholarship to the Royal Academy of music in London. Here he continued with the pianist and composer Franz Reizenstein, himself a pupil of Solomon, Hindemith and Vaughan Williams.

Whilst at the Academy, Philip gained his recital diploma and won many prestigious awards, including the coveted MacFarren gold medal. He was later awarded the first Sir Frederick Shinn Fellowship. He continued private studies with Louis Kentner in London and later with Yvonne Lefebure in Paris, receiving impressive reviews from the press.

He made his London debut in the Wigmore Hall and this led to frequent appearances on the South Bank and throughout Britain with all the BBC orchestras, the London Symphony, London Sinfonietta, the Royal Philharmonic, the Halle, the Bournemouth Symphony, the City of Birmingham and the Royal Liverpool Philharmonic.

He has used his extensive repertoire of over 60 concertos, playing in such diverse countries as France, Italy, the Netherlands, Scandinavia, the USA and Canada, Saudi Arabia, Egypt and Mexico, where he is a regular and very popular visitor.

He has also proudly retained his relationship with Ireland where he returns each season. For his first concerto appearance in Dublin, he played the George Gershwin Concerto in F and this set the seal for his passion and interest in American music. He then gave the Irish premier of Samuel Barber’s Piano Concerto for which he has a particular affection. Many performances of this work followed. Besides the many RTÉ National symphony broadcasts, he has also performed this work with three separate BBC orchestras as well as an EBU broadcast from Ankara in Turkey and the first performance of the work in Paris.

His BBC, RTÉ and foreign broadcasts are many and he has also been a frequent visitor to the BBC Promenade concerts, where he toured with the National Youth orchestra of Great Britain playing in the Concertgebouw in Amsterdam and Tivoli Gardens in Denmark before his appearance in the Royal Albert hall. He followed this two years later with a televised performance of Rachmaninov’s ‘Paganini Rhapsody’.

For Hyperion Philip has recorded an eight-volume set of the music of the colourful nineteenth-century American composer, Louis Moreau Gottschalk, the critically acclaimed Maiden’s Prayer which is heard repeatedly on Classic FM, RTÉ and BBC Radio 3, and an album of the solo piano music of the Austrian composer, Henri Herz. He has also recorded on the Nimbus, RCA Red Seal, Continuum, Marco Polo, BBC and Chandos labels as well as Somm recordings.

As a composer, Philip Martin is prolific and he has fulfilled many major commissions including a Harp concerto and several large choral works. His large-scale choral work, In Dublin’s Fair City was written to mark the millennium. His output includes a symphony, three piano concertos, over 300 songs and many instrumental and chamber works including seven piano trios. Many of these works have been commercially recorded.

His music has an immediate appeal, often using places, paintings and people as a starting point. These pictorial and dramatic qualities moved a recent reviewer to write about his first symphony, ‘This work created a distinctive harmonic language through the contrapuntal combination of certain kinds of vigorously rhythmic, colourful ideas’.

Philip is a member of Aosdana, Ireland’s state-sponsored academy of creative artists. In 1989 Yehudi Menuhin presented him with an honorary Fellowship of the Royal Academy of Music in London. In 2010 he received a BA in Humanities from the Open University specialising in Art history.

By donating his professional services, Philip supports numerous charities and every year raises generous amounts for their benefit.