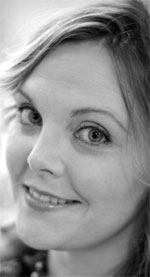 see also Elin Manahan Thomas (reader)
Born and bred in Swansea, Elin read Anglo-Saxon, Norse and Celtic at Clare College Cambridge, before moving to the musical world and a busy career of performing, broadcasting and presenting. She released her debut album, Eternal Light, in 2007 with the Orchestra of the Age of Enlightenment; and is the first singer ever to record Bach’s Alles mit Gott, a birthday ode written in 1713 and discovered in 2005. She first received acclaim for her Pie Jesu on Naxos’ award-winning recording of Rutter’s Requiem, and won critical praise for her performance in Bach’s St Matthew Passion at the Thomaskirche in Leipzig, under Sir John Eliot Gardiner. She has performed in Classic FM’s 15th birthday concert, at Songs of Praise’s ‘The Big Sing’, and gave the World Premiere of Sir John Tavener’s Requiem in Liverpool Cathedral (also recorded for EMI).

Elin was invited to perform in the Vatican on Easter Sunday, and appeared at the Edinburgh International Festival with the Royal Flanders Ballet. Concert highlights include Handel’s Messiah in the Concertgebouw, Amsterdam, with Britten Sinfonia, Bach’s Christmas Oratorio on Radio 3, Couperin in the Wigmore Hall, and an invitation to sing before the Queen of Thailand, in Bangkok. She has performed for many of today’s leading conductors, and has released five solo albums, as well as featuring as soloist on innumerable discs, in repertoire ranging from Dowland to MacMillan. On television, Elin has appeared on BBC 2 (‘A Musical Nativity on Christmas Day’) and Channel 4 (‘How Music Works’), as well as being a familiar face as a presenter.