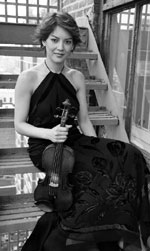 Born in San Diego of American and Japanese heritage, Anne Akiko Meyers’s dynamic and impassioned music-making, technical brilliance and compelling stage presence have made her one of the most sought-after violinists performing today. Her insightful interpretations of both traditional and contemporary repertoire attract worldwide critical acclaim. Ms Meyers studied with Alice Schoenfeld at the Colburn School of Performing Arts in Los Angeles, Josef Gingold at Indiana University, and Masao Kawasaki and Dorothy DeLay at the Juilliard School. She now makes her home in New York City.

Ms Meyers has appeared with most of the major American orchestras, and her global reputation has led to tours with many European orchestras, as well as the Australian Chamber Orchestra, the Sydney Symphony Orchestra and Tokyo’s NHK Symphony. She is also a popular figure at international music festivals and has been a frequent guest at the Aspen, Hollywood Bowl, Ishikawa, Mainly Mozart, Miyazaki, Mostly Mozart, Ravinia, Tanglewood, and Bravo! Vail Valley festivals. She was invited to participate in the Leonard Bernstein celebration at the Lincoln Center Festival in New York in 1998, and a memorable recital tour also took Ms Meyers to the Old Forbidden City in Beijing, and to Madrid and Ottawa. With an interest in contemporary music, she has given the first performances of works by Nathan Currier, Roddy Ellias, Jennifer Higdon, Somei Satoh, Joseph Schwantner and Ezequiel Viñao.