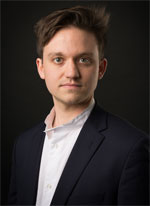 Hugo Hymas’s career has so far taken him far and wide to Europe, USA, Asia and Australia performing in some of the world’s great venues: Philharmonie Paris, Concertgebouw, KKL Lucern, Royal Albert Hall and Wigmore Hall. He recently made his first trip to Australia performing tenor solos in Purcell’s King Arthur with Gabrieli Consort (Paul McCreesh) and is looking forward to Bach’s Weihnachtsoratorium in Sweden with Göteborgs Symfoniker (Andreas Spering), Handel’s sacred oratorio La Resurrezione with Les Nouveaux Caractères (Sébastien d’Hérin and a trip to Switzerland for Bach’s B minor mass with Kammerorchester Basel (Winfried Toll).