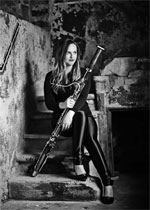 Described as a ‘bassoonist in a million’ by the Artsdesk, Amy Harman is quickly establishing a herself as a pioneer for the instrument. Born in London, Amy studied at the Royal College of Music and at the Akademie Múzických in Prague. At the age of 23 she was appointed Principal Bassoon of the Philharmonia Orchestra, and in 2014 was selected by Young Classical Artists Trust (YCAT). She is currently principal of ENO and Aurora Orchestras.

Passionate about bringing the bassoon to a wider audience, in 2012 Amy appeared as a ‘flying soloist’ in Birmingham Opera’s premiere of Stockhausen’s Mittwoch aus Licht and Her ‘introduction to the bassoon’ has been watched by over half a million people on YouTube. She has appeared as soloist with the English Chamber Orchestra and has given recitals at Wigmore Hall and throughout the UK and Europe.

Amy is a professor at the Royal Academy of Music.