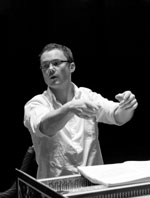 see also Matthew Halls (piano)
see also Matthew Halls (conductor)
Matthew Halls is one of Britain’s most exciting young conductors as well as a leading keyboard player. He studied music at Oxford University where he was organ scholar and later assistant organist at New College. He became Associate Director of The King’s Consort in 2005 before being appointed Artistic Director. In addition to his work with The King’s Consort he frequently appears as a guest director with period-instrument ensembles such as The English Concert, Holland Baroque Society and Portland Baroque Orchestra, USA. Most recently he has made conducting debuts with the Rundfunk-Sinfonieorchester Berlin, Orchestra Philharmonique de Monte Carlo, Hessischer Rundfunk Sinfonie, Norrköping Symphony Orchestra, London Mozart Players, and RTÉ Concert Orchestra Dublin.

As a harpsichordist, organist and fortepianist Matthew has appeared on well over fifty recordings, given recitals all over the world and broadcast regularly both in the United Kingdom and abroad. He is a tutor for the European Union Baroque Orchestra and The Jerusalem Early Music Workshop.