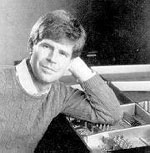 Ian Hobson is a musician of tremendous versatility with an international reputation as a pianist, conductor and teacher. Born in Wolverhampton, he studied music at the Royal Academy of Music and Cambridge University in England, and at Yale University in the United States. His international career was launched in 1981 when he won First Prize at the Leeds International Piano Competition, having already garnered silver medals at both the Artur Rubinstein and Vienna-Beethoven competitions. His teachers have included Sidney Harrison, Ward Davenny, Claude Frank, and Menahem Pressler.

Hobson's programmes demonstrate a repertoire that spans centuries, extraordinary command of styles and scholarly vision, in addition to notable keyboard prowess. His recordings and recital performances encompass a cross-section of works from mammoth to miniature: the complete cycle of Beethoven Sonatas, all of the Brahms Variations, Rachmaninov's Études-Tableaux and Preludes, the Chopin/Godowsky Études, Bach's 'Goldberg Variations' and contemporary works written for him by Ridout, Lees, Liptak and Gardner.

Ian Hobson frequently performs work for piano four-hands and two pianos with his wife, Claude Edrei Hobson. With their six children they make their home in Urbana, lllinois.