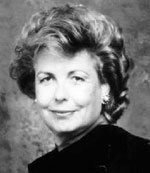 The ravishing, crystal-clear, lyric voice of Arleen Auger was stilled on 10 June 1993 when she succumbed to brain cancer. The revered American soprano was 53 years old. A resident of Hartsdale, New York, Joyce Arleen Auger was born on 13 September 1939 in southern California. She sang from the age of two months, long before she would talk. As a child, she began her formal music training in piano and violin. All through elementary and high school she performed as soloist in countless school, community, and church events, and distinguished herself as concertmaster of her high school orchestra. Ms Auger earned a BA in Education from California State University and worked as a kindergarten and first grade teacher after graduation. She studied voice with tenor Ralph Errolle in Illinois and returning to California won first place at the Viktor Fuchs Vocal Competition of Los Angeles. This prize included the airfare to Vienna, Austria, and several modest singing engagements. Equipped with only two coloratura arias and not knowing a word of German, Arleen Auger was 'discovered' and signed by the prestigious Vienna Staatsoper within weeks of her arrival. She sang extensively throughout Europe, always devoting a large portion of her performance schedule to her beloved song recital work. In 1969, Ms Auger made her American operatic debut at the New York City Opera. A teacher of exceptional talent and commitment, Arleen Auger always made time for voice students. It was extremely important to her to always schedule teaching and master classes into her demanding schedule. During her illustrious career she appeared in over 60 major music festivals in Europe, North America, and Asia. Her devotion to sacred music is legendary in the music world.

'This is a singer who loves to sing, and for all the right reasons', Bernard Holland noted in The New York Times. Arleen Auger was a welcome and familiar figure in the world's most prestigious concert halls and opera houses, appearing at the bastions of the music world: Arleen Auger stands securely as one of the most recorded voices of all time and her recordings have been distinguished by dozens of awards and honors. Flawlessly performing her signature piece, Mozart's Exsultate Jubilate, Arleen Auger's emotionally communicative voice and impeccable artistry were enjoyed by over 700 million TV viewers as the first American to sing at a British Royal Wedding, in 1986.