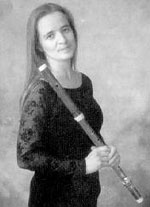 Since winning first prize at the American National Flute Competition in 1984, Rachel Brown has become known for her versatility on modern and historical flutes and recorders. She plays principal flute with The Brandenburg Consort, The King's Consort, the Academy of Ancient Music, The Hanover Band, Collegium Musicum 90 and The Parley of Instruments with whom she has given many concerto appearances in Europe, America and Japan. Her solo recordings include concertos by Vivaldi, Handel, Quantz, Telemann, J S and J C Bach and three recital discs of French Baroque music, Quantz sonatas and works by Schubert and Boehm for Chandos. This recording of C P E Bach concertos follows her highly acclaimed recording of Quantz concertos for Hyperion.

In addition to giving masterclasses abroad, Rachel was for many years a professor at the Royal Northern College of Music where she originally studied with Trevor Wye and Lisa Beznosiuk. She has now joined the staff of The Guildhall School of Music and Drama and The Royal College of Music in London. She is the author of the forthcoming Cambridge handbook to The Early Flute.