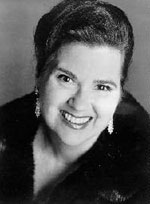 The outstanding Dutch soprano Elly Ameling studied Rotterdam and The Hague with Bodi Rapp. She completed her training with in Paris. In 1956 she won the first prize in the vocal competition but her career really started to take off after she won first prize at the ‘Concours International de Musique’ in Geneva in 1958. Many other first prizes followed.

Elly Ameling made her formal recital debut in Amsterdam in 1961. Subsequent appearances with the Concertgebouw Orchestra and the Amsterdam and the Rotterdam Philharmonics secured her reputation. Since then concert tours have led her regularly throughout the world. She has performed with most major symphony orchestras, and conductors She is a regular guest at the major festivals and she also regularly receives invitations to give master classes.

Elly Ameling's repertoire ranges from Monteverdi and Bach through Mozart, Schubert, Schumann, Wolf, and Debussy to composers of the 20th century. More than 150 LPs and CDs document this extended repertoire. Elly Ameling has been granted three honorary degrees in the USA and Canada.