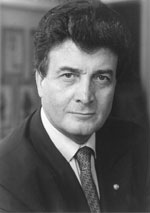 Born in Milan, Aldo Ceccato studied at the Conservatorio Giuseppe Verdi and perfected his art of conducting at the Musikhochschule in Berlin. He then became assistant to Sergiu Celibidache, with whom he also continued his studies. He is a member of the Accademia di Santa Cecilia, Rome, and holds an honorary doctorate from Eastern Michigan University. He has been honoured with the titles of both Commendatore and Grand' Ufficiale by successive Italian presidents, and Cavaliere di Gran Croce, Italy's highest honour. He has also been awarded the Brahms Medal by the Senate of Hamburg, one of the highest cultural accolades in Germany.

Aldo Ceccato has previously been Musical and Artistic Director of the Detroit Symphony Orchestra, the Meadow Brook Festival, the State Philharmonic Orchestra in Hamburg, Norway's Bergen Philharmonic, the NDR Orchestra in Hannover, the Italian Radio Symphony Orchestra in Turin, the Spanish National Orchestra in Madrid and the Czech Philharmonic of Brno. He is currently Music Director of the Foundation I Pomeriggi Musicali of Milan, one of the oldest orchestras in Italy, succeeding many illustrious conductors over the years (Abbado, Bernstein, Celibidache, Chailly, Dallapiccola, Giulini, Hindemith, Honegger, Maazel, Maderna, Muti and others). He is also Conductor Laureate of the Czech State Philharmonic Orchestra of Brno with whom he has performed at the Prague Spring Festival and toured Europe, including a prestigious visit to Rome for a special concert in the Vatican for the Pope.

He has conducted all of the world's greatest orchestras including the Boston Symphony, Chicago Symphony, the Orchestras of Cleveland and Philadelphia, New York Philharmonic, London Philharmonic, Berlin Philharmonic, Staatskapelle Berlin, Staatskapelle Dresden, Israel Philharmonic and the NHK Orchestra of Tokyo. He has performed in the world's most prestigious venues, from La Scala in Milan, Royal Opera House Covent Garden, Paris Opera, Lyric Opera of Chicago to the State Operas of Hamburg and Vienna. He has also taken part in the most acclaimed international festivals, including Glyndebourne, Edinburgh, Berlin and Prague.