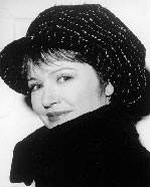 Born and raised in Canada, Nancy Argenta has lived in England since 1982. Since making her professional debut in 1983, Nancy has distinguished herself internationally as one of the foremost sopranos of her generation. With a repertoire spanning three centuries, she has been hailed not only as the supreme Handel soprano of our age but also praised for her performances of works by composers as diverse as Mahler, Mozart, Schubert and Schoenberg. Her ability to adapt from large-scale orchestral works to chamber music to recitals has earned her great recognition and respect within the world of music.

She works closely with such conductors as Pinnock, Hogwood, Gardiner and Norrington and has sung with the Philharmonia Orchestra, City of Birmingham Symphony Orchestra, Düsseldorf Symphony, St Luke's Orchestra of New York and the Toronto and Montreal Symphony Orchestras. In opera, concert and recital she has appeared at many leading festivals including Aix-en-Provence, Mostly Mozart, Schleswig-Holstein and the BBC Proms. Her discography includes Bach's St John Passion, B minor Mass, Magnificat and Christmas Oratorio, Purcell's King Arthur and Haydn Masses, Mozart's Requiem, Magic Flute and Don Giovanni and a live recording of Mozart's Cosi fan tutte with Sigiswald Kuijken. She has also recorded Schubert Lieder, Scarlatti cantatas and some of Bach cantatas.

She worked with the Boston Symphony Orchestra and appeared in the Salzburg, Flanders and Budapest festivals, whilst also working with the orchestra of the Age of Enlightenment, La Petite Bande and The English Concert.