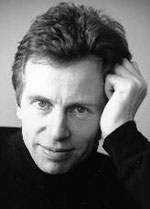 In recent years the Cornish-born baritone Richard Jackson has become particularly known as a concert artist and a performer of new operas. After singing in the Choir of King's College, Cambridge, for three years, he attended The Guildhall School of Music and Drama in London and worked privately with Pierre Bernac.

He was a founder member of The Songmakers' Almanac, visiting the USA, Hong Kong and the festivals of Edinburgh, Bath, Aldeburgh and Bergen with the group, and taking part in their series of recordings for Hyperion.

Richard undertakes extensive concert work, including appearances with Willcocks, Marriner, Bertini, Gardiner and Hickox. He has performed Finnissy's The Cry of Zephaniah for BBC Television, Handel's Belshazzar at the Bath Festival, Christus in Jonathan Miller's dramatisation of Bach's St Matthew Passion at the Festival d'Ambronay in France, Britain and Spain, Britten's War Requiem at the Royal Albert Hall and St Matthew Passion with the City of London Sinfonia at the Barbican.