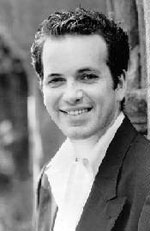 Born in Glasgow, Jamie MacDougall has established himself as one of the country’s most versatile young singers of his generation. Whither on the operatic stage or the concert platform he has sung to critical acclaim. In operatic repertoire ranging from Monteverdi to Britten he has appeared with many of the British opera companies as well as singing in Europe, America and Canada. He has worked with some of the worlds top Baroque, Chamber and Symphony orchestras including; The Orchestra of the Age of Enlightenment, Scottish Chamber Orchestra and the St Louis and Houston Symphony Orchestras, with conductors like Tamas Vasary, Ivan Fischer, Marin Alsopp, Richard Hickox, Trevor Pinnock, Nicholas McGegan and Daniel Harding.