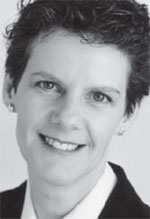 Originally from Melbourne, Alison Mitchell was appointed Principal Flute of the Scottish Chamber Orchestra in 2003. Since leaving Australia to continue her studies in Basle with the renowned Swiss flautist, Peter-Lukas Graf, she has maintained a very successful professional career between Europe and Australia playing with many major orchestras on both continents.

Shortly after arriving in the UK, Alison was appointed to the position of Principal Flute with the Orchestra of Scottish Opera with whom she performed for five years before embarking on a freelance career dedicated to solo and chamber music performances. From there, an opportunity arose for her to return to Australia to take up the position of Associate Principal Flute with the Sydney Symphony. During a seven year period with the Symphony, Alison also regularly performed as guest principal flute with the highly regarded Australian Chamber Orchestra and pursued a varied mix of chamber music, recordings, broadcasts for the ABC and solo recitals.

Since her return to Scotland as Principal Flute with the Scottish Chamber Orchestra, Alison has performed regularly with SCO chamber ensembles and as a concerto soloist. Her performances have included Mozart’s Concertos in G and D, the Poulenc Sonata (orch. Berkeley), Concerto for Flute (1980) by Nigel Osborne and Bach’s Brandenburg Concerto No 4. As well as her work in Scotland, Alison has a continuing relationship with the Australian Chamber Orchestra and in 2005 she joined with Angela Hewitt and the ACO to produce recordings and performances throughout Australia of Bach’s Brandenburg Concerto No 5 and the Triple Concerto for flute, violin and piano. The recording was subsequently a Gramophone Editor’s Choice.

Alongside her busy SCO schedule Alison performs regularly as a soloist and chamber musician. She is also a lecturer in Flute at the Royal Scottish Academy of Music and Drama.