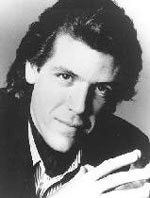 America's leading baritone, Thomas Hampson has been recognised for his versatility and breadth of achievement in opera, song, recording, research and pedagogy. The singer, who hails from Spokane, Washington, studied with Marietta Coyle, Elisabeth Schwarzkopf, Martial Singher and Horst Günther and now enjoys an international career that has taken him to all of the world's most prestigious stages and concert halls, making him one of today's most respected, innovative and sought-after soloists.

Hampson's operatic roles span a wide range of repertoire from Rossini to Verdi and Puccini and from Monteverdi to Britten and Henze. Soloist of choice for today's foremost conductors and the pre-eminent recitalist of his generation, Hampson has conceived and performed thoughtfully-constructed programmes which explore the rich diversity of song idioms, languages and styles. He has furthered his commitment to the art of song not only by teaching, but also by researching the repertoire, and designing multi-media projects like ‘Voices from the Heart’, a performance documentary on the music of Stephen Foster for the Hessischer Rundfunk/Arte network, or the highly acclaimed ‘I Hear America Singing’, a programme about the cultural contexts of American song.

One of the most prolific and diversely-recorded artists of his generation, Hampson's recordings appear on several major labels. Almost all of his recordings have received the rewards of the industry, including six Grammy nominations, two Edison Prizes, three 1994 Gramophone Awards, the 1992 Grand Prix de la Nouvelle Académie du Disque, the Grand Prix du Disque, the 1994 Charles Cros Académie du Disque Lyrique, as well as the esteemed Toblacher Prize. To these recording honours are added the 1997 Citation of Merit for Lifetime Contribution to Music and Education from the National Arts Club on America, 1994 Cannes Classical Awards Male Singer of the Year, 1997 and 1994 German Critics' Echo Preis for Best Male Singer, 1993 Classical Music Awards' Male Singer of the Year, Musical America's Vocalist of the Year 1992, the Münchener Abendzeitung's Stern des Jahres 1992, the Music Academy of the West's first Distinguished Alumni Award and the Merola Distinguished Alumni Award as well as honorary membership in London's Royal Academy of Music and honorary doctorates from the San Francisco Conservatory and Whitworth College and the covered title of Kammsänger in Vienna.