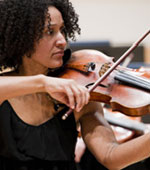 Jane Atkins started playing the violin after requesting one for her fourth birthday, and two years later she gained a scholarship to study at the Yehudi Menuhin School. Whilst continuing her studies with David Takeno at the Guildhall School of Music and Drama, she won the 1988 London Philharmonic / Pioneer Young Soloist of the Year and gained second prize in the Lionel Tertis competition.

Since her debut performing the Walton concerto with Kurt Sanderling and the London Philharmonic Orchestra in 1989, Jane has appeared as a soloist throughout the UK and Europe performing with many orchestras, notably the Chamber Orchestra of Europe; the English and Scottish Chamber Orchestras; the Dutch and Danish Radio Orchestras and both the City of London and Northern Sinfonias. As a recitalist she has performed in major British festivals including Newbury, Harrogate, Cheltenham and Spitalfields.

In 2008 Jane was appointed Principal Viola of the Scottish Chamber Orchestra and began teaching at the Royal Scottish Academy of Music and Drama. Since her move to Scotland, Jane has joined Alexander Janiczek to perform the Mozart Sinfonia Concertante and has also performed with pianist Llŷr Williams in both the Edinburgh International and Perth Festivals. Jane’s recordings include the Telemann and reconstructed Bach concertos, Tavener’s Out of the Night and Morton Feldman’s Rothko Chapel.