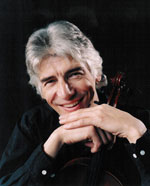 Born in London, Roger Chase studied at the Royal College of Music with Bernard Shore and in Canada with Steven Staryk, also working for a short time with the legendary Lionel Tertis, whose Montagnana viola he now plays.

He performed with the English Chamber Orchestra, appearing as soloist at the Proms at Royal Albert Hall, and played in major cities throughout the UK and Europe, USA, Canada, Australia, New Zealand, Japan, the Middle East, and India. His festival appearances include the Schiermonnikoog (Holland), Consonances (France), Casalmaggiore (Italy), and Bowdoin (Maine) International Music Festival.

Chase was a member of The Nash Ensemble for more 20 years, as well as the London Sinfonietta , Esterhazy Baryton Trio, Quartet of London, Hausmusik of London, and the London Chamber Orchestra.

Roger Chase taught at the Royal College of Music, the Guildhall School, the Royal Northern College of Music, Oberlin College, and Roosevelt University. With Otaki he presented recitals of works inspired by Lionel Tertis at Washington’s National Gallery, Princeton University, and in Cleveland, Boston, Toronto, and elsewhere.