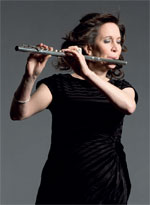 Sarah pursues a demanding and varied career as a performer and educationalist. She is a founding member of the chamber ensemble Chroma, and has been sub-principal flute with Britten Sinfonia since 2006.

Sarah has appeared with numerous symphony and chamber orchestras throughout the UK, performing in concert halls across the world, most notably as guest principal flute with the BBC Symphony Orchestra and the Royal Scottish National Orchestra. Sarah’s work with Britten Sinfonia is rich and diverse, ranging from an unconducted St John Passion to Proms performances with Anoushka Shankar, and the Strictly Come Dancing Prom.

As an orchestral and chamber musician Sarah has premiered hundreds of new works and commissions, frequently working in close collaboration with the composer. She has particularly enjoyed ongoing Britten Sinfonia projects with Thomas Adès, Oliver Knussen, James Macmillan and Steve Reich.

She is also a member of The Marais Ensemble who curated an extensive annual chamber music festival in Sarah’s hometown of Potton, Bedfordshire for fourteen years.

Sarah is a keen educationalist. She currently runs interactive music-technology workshops in Special Educational Needs schools, and is heavily involved in a diverse range of projects delivered by Britten Sinfonia’s Creative Learning department, most notably: community music-making for families living with dementia; and Britten Sinfonia Academy, a training orchestra for exceptionally talented teenagers.

Sarah studied at the Royal College of Music, having been awarded a postgraduate scholarship, as well as studying with Clare Southworth and David Nicholson. She is the flute tutor at Goldsmiths College, University of London, and plays on an Arista flute which she acquired in 2016.