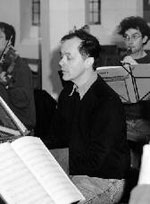 Jeremy Barlow is one of the most versatile musicians on the British early music scene, with a career encompassing writing, lecturing, and performing. After studying at Trinity College Cambridge and the Royal Academy of Music, London, his first job was as flutist with the Iceland Symphony Orchestra. After this, he worked for several years as flutist and music director for several London theatres, including the National Theatre and the Royal Shakespeare Theatre. Barlow founded the Broadside Band, a period-instrument ensemble that specializes in English popular music from 1550-1750. In addition to being the director of this ensemble, Barlow plays a variety of instruments, including Virginals, regal, flute, recorders, flageolets, pipe, and tabor. With the Broadside Band, Barlow has recorded a large body of English dance music. The Broadside Band's recording of The Beggar's Opera on Hyperion (featuring Bob Hoskins and Sarah Walker) won an Edison award and its Songs and Dances from Shakespeare found a wide audience.