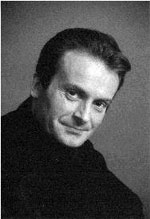 With Andrew Steggall and The Motion Group he has collaborated with Jeremy Irons and Hugh Dancey in a production of The Soldier’s Tale at the Old Vic Theatre which won immense critical acclaim. Robin O’Neill and the Orchestra Citta Aperta have made a recording of The Dream of Urizen as part of an ongoing survey of the music of the Italian composer Carlo Crivelli.