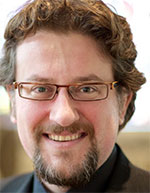 Giles Underwood is a versatile singer, specialising in Baroque repertoire and contemporary music, but also at home with Mozart and Puccini. He was a chorister at Westminster Abbey and an academical clerk at Magdalen College, Oxford, where he read biology. He went on to study on the postgraduate and opera courses at Guildhall School of Music and Drama, where he now holds the post of Vocal Studies Lecturer.

On the stage, he has played many major roles, including Don Giovanni, Count Almaviva (Le nozze di Figaro), Tarquinius (The Rape of Lucretia) and Marcello (La Bohème). On the concert platform, he has sung Haydn in the Royal Albert Hall, Wolf in the Wigmore Hall, Bach in the Amsterdam Concertgebouw and Vaughan Williams in the Sao Paolo Opera House. He has recorded widely, and his performance on OpusArte’s disc of Membra Jesu Nostri by Buxtehude has received critical acclaim, as has his work with the solo voice ensemble, I Fagiolini, with whom he sang for nine years.

In addition to his students at Guildhall, he teaches singing to undergraduates at various Oxford colleges, including Magdalen, Christ Church, Queens, Merton and Exeter. He teaches on Eton Choral Courses and for The National Youth Choirs of Great Britain, and is Vocal Coach for The London Symphony Chorus. As Director of Music at University College, Oxford (Univ), he runs the Chapel Choir and oversees music-making in the college. He is the founder and director of The Martlet Ensemble, Univ’s newly-formed ensemble-in-residence.