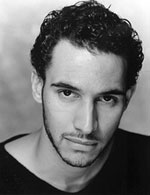 Born to an Irish father and a Guyanese mother, Eamonn O’Dwyer began his vocal training at the age of seven under the tutelage of James O’Donnell at Westminster Cathedral. As a cathedral chorister he toured extensively around Europe and featured as a soloist on Hyperion’s recordings of Poulenc Sacred Music, Adeste Fideles and Panis Angelicus. From there he went on to join The King’s Consort, and became a featured soloist for the highly acclaimed Purcell Sacred Music Series, including several television appearances and a Wigmore Hall concert in 1995, Purcell’s tri-centenary year. Eamonn also played the part of The Boy in Richard Harvey’s oratorio Plague and the Moonflower for BBC2, and sang solo vocals for Harvey’s soundtrack to the 1994 film Doomsday Gun.

After many distinguished engagements as a treble, Eamonn turned to jazz and pop and subsequently trained in Musical Theatre at the Royal Academy of Music. He worked part-time as assistant to Simon Perry at Hyperion, and is pursuing a career in acting. He recently gave a critically acclaimed performance of Sir Peter Maxwell Davies' Eight Songs for a Mad King as part of the North-Eastern Scotland 'Sound' Music Festival.