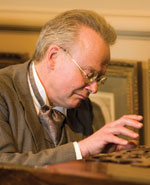 see also David Owen Norris (baritone)
David Owen Norris, the first winner of the Gilmore Artist Award, has played concertos all over North America and Australia, along with several appearances at the BBC Proms. Solo recitals across the world have particularly featured the music of Brahms, Schubert, Poulenc, Bax and Elgar. His discovery that the world’s first piano concertos were written around 1770 in London for the tiny square piano led to a complete reconsideration of that instrument, with an epoch-making recording, and concerto tours of Europe and America.

His is a familiar face on music television. His ‘Chord of the Week’, now in its sixth series, has helped make BBC 2’s Proms Extra one of the most-watched classical music programmes in the world. His many radio presentations include the Playlist series on BBC Radio 4, and In Tune and The Works on Radio 3, where this summer sees his twenty-seventh appearance on Building a Library.

David Owen Norris’s recent compositions include the oratorio Turning Points, a celebration of democracy supported financially by the Agincourt 600 Committee, and HengeMusic, a multi-media piece for organ and saxophone quartet with film and poetry, supported by Arts Council England. His oratorio Prayerbook and his song cycles Tomorrow nor Yesterday and Think only this are recorded on EM Records. He has recently published a series of conversations with his son, the novelist and playwright Barney Norris. The Wellspring (Seren Books) deals with cultural inheritance and the question of Englishness across a spectrum of different arts.