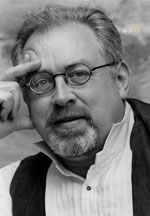 Baritone David Wilson-Johnson is one of Britain’s most established artists, and in a long and illustrious career he has been a regular guest of the major opera houses and orchestras and festivals worldwide under conductors including Ashkenazy, Boulez, Brüggen, Dutoit, Giulini, Harnoncourt, Holliger, King, Knussen, Mackerras, Previn, Rattle and Rozhdestvensky.

His discography includes Mahler’s Symphony No 8 with Rattle and the CBSO, Brahms’ Requiem with Previn and the London Symphony Orchestra, Schubert’s Winterreise with fortepianist David Owen Norris, Berlioz’ Romeo and Juliet and The Damnation of Faust with the Philadelphia Orchestra and Dutoit, and Bernard Herrmann’s cantata Moby Dick with Schønwandt and the Danish National Radio Symphony Orchestra.

David Wilson-Johnson lives between houses in London, Amsterdam and the South West France, where he has for the last thirty years run a summer school at Ferrandou.