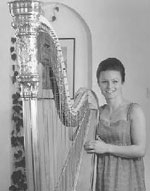 Susan Drake, born in Cardiff, Wales, is recognised as one of Britain's finest harpists, appearing regularly in London's concert halls and at major music festivals both in Britain and overseas. In addition she is a frequent broadcaster both on radio and television. The music critic of The Sunday Telegraph has called her 'An astonishing artist' and her playing has inspired several composers to write pieces for her.

Her first Hyperion record, Echoes of a Waterfall won a Music Trades Association Award as the best instrumental record of the year. Her second record, equally successful, was Arabesque, as was her third, Caprices and Fantasies, both on Hyperion.