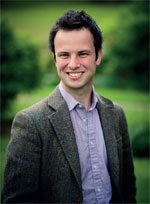 British-Irish tenor Ronan Busfield was a Scottish Opera Emerging Artist and studied at the Royal Conservatoire of Scotland’s Alexander Gibson Opera School. Prior to this, Ronan read music as a Choral Scholar at Magdalen College, Oxford University, then was a Lay Clerk in the Chapel of St George, Windsor Castle, singing for daily services, tours, broadcasts, concerts, recordings and royal events. During this time, he completed the ENO Opera Works programme, in addition to performing with the BBC Singers, Tenebrae, Polyphony, Ex Cathedra and The Dunedin Consort. In 2018 Ronan was a Britain’s Got Talent 2018 semi-finalist, wowing the judges with his rendition of 'Maria' from West Side Story.

Ronan has performed as a principal artist for English Touring Opera, Scottish Opera, Wexford Festival Opera, as an understudy and chorus member for Glyndebourne Festival Opera and was a Britten-Pears Young Artist.

When not engaged in singing, Ronan works in the world of Executive Search, and enjoys spending time with his young family, renovating his house (which used to be a pub) and attempting to train his stubborn rescue German Wirehaired Pointer.