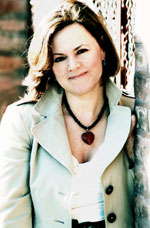 One of Britain’s most versatile and imaginative musicians, Kathryn Stott studied at the Yehudi Menuhin School with Vlado Perlemuter and Nadia Boulanger, and at the Royal College of Music in London with Kendall Taylor. She is a frequent guest at the world’s major leading concert halls and appears as a concerto soloist and recitalist in Britain and throughout Europe, the Far East and Australia.

Greatly in demand as a chamber musician, she has long-standing partnerships with, among others, Yo-Yo Ma, Truls Mørk and Christian Poltéra, Janine Jansen and Noriko Ogawa. A champion of contemporary music, she has given the first performances of many major works including concertos by Sir Peter Maxwell Davies and Michael Nyman, and, with Noriko Ogawa, Graham Fitkin’s Circuit for two pianos and orchestra. She is an enthusiastic exponent of tango and other Latin dance music, a passion reflected in her collaboration with Yo-Yo Ma and leading South American musicians on the Grammy-winning Sony CD Soul of the Tango and its successor, Obrigado Brazil.

The diversity of Kathryn Stott’s performing career is reflected in her discography which includes the complete solo piano music of Fauré, the concertos of Kabalevsky and solo music by Koechlin, music by John Foulds and Erwin Schulhoff, La Habanera featuring music by Ernesto Lecuona, and a recital of French cello sonatas with Yo-Yo Ma.

Kathryn Stott’s diverse career remains truly international and, continuing to captivate audiences with her poetic musicality and engaging personality, her current and future plans include further recordings and tours of both North and South America, and performances in Australia, Hong Kong and Japan as well as throughout Europe.

Kathryn has recently accepted a position on the boards of Nordoff-Robbins Music Therapy fundraising committee and the Halle.