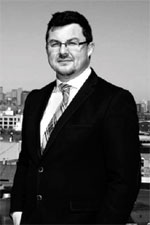 Described by the Irish Times as ‘enterprising and wide-ranging’, Desmond Earley has established a reputation as one of Ireland’s foremost choral directors and early keyboard specialists. A College Lecturer in Performance Studies and Artistic Director of the UCD ‘Ad Astra’ Academy, Earley is the founding Artistic Director of the Choral Scholars of University College Dublin. He holds a DMus Performance degree on the harpsichord from the Royal Irish Academy of Music, having studied previously at the Universität für Musik und darstellende Kunst, Wien, at the DIT Conservatory of Music and Drama, and at University College Dublin.

A keen early music expert, he is the founding director of The Earley Musicke Ensemble, a group that specialises in the performance of lesser-known works by Baroque composers. As a respected consort instrumentalist and director, Desmond has played with many of the world’s finest ensembles including the Irish Baroque Orchestra, the RTÉ Concert Orchestra, Ensemble eX, the European Union Chamber Orchestra and the English Chamber Orchestra. Konrad Junghänel, Christopher Hogwood, Roy Goodman, Sir James Galway and Bernadette Greevy are among the world-class musicians with whom Desmond has collaborated.

As a celebrated composer and arranger, Earley has published works with Music Sales (UK), Hal Leonard Corporation (USA), Alliance Music (USA) and with Seolta Music (Irl) for whom he is editor of the ‘College Choral Series’. In recent years he has worked on projects for The Gate Theatre, orchestral arrangements for the RTÉ Concert Orchestra, and choral arrangements for the London-based professional choir, Tenebrae (Nigel Short), which were debuted at the 2013 St Riquier Festival in France.