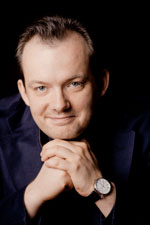 In 2014 Andris Nelsons became Music Director of the Boston Symphony Orchestra, and in 2017–18 he takes up the post of Gewandhauskapellmeister of the Gewandhausorchester Leipzig. With both appointments, and in leading a pioneering alliance between these two esteemed institutions, Andris Nelsons is firmly underlined as one of the most renowned and innovative of today’s conductors. He gave his debut performance with the Gewandhausorchester with works by Richard Strauss, Beethoven and Sibelius in 2011, and in the same year he made his Boston Symphony Orchestra debut, conducting Mahler’s Symphony No 9 at Carnegie Hall. In 2012 Nelsons made his debut at Tanglewood, and in 2013 he made his Symphony Hall debut. In 2015 the BSO and Nelsons embarked on their first European summer festival tour together, with performances in London, Salzburg, Grafenegg, Lucerne, Milan, Paris, Cologne and Berlin, to wide critical acclaim. Nelsons continues his collaborations with the Berliner Philharmoniker, Wiener Philharmoniker, Het Koninklijk Concertgebouworkest and Philharmonia Orchestra. Andris Nelsons is a regular guest at the Royal Opera House, Covent Garden, and the Metropolitan Opera, New York.

Praised for his profound interpretations of a wide repertoire, commitment to new works and transformative music-making with the City of Birmingham Symphony Orchestra, Nelsons received the Royal Philharmonic Society Music Award as conductor in 2015.

Born in Riga in 1978 into a family of musicians, Andris Nelsons began his career as a trumpeter in the Latvian National Opera Orchestra before studying conducting. He was Music Director of the City of Birmingham Symphony Orchestra from 2008 to 2015, Principal Conductor of Nordwestdeutsche Philharmonie in Herford, Germany, from 2006 to 2009, and Music Director of Latvian National Opera in 2003–2007.