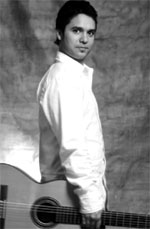 Born in Mexico City, Morgan Szymanski studied at the Royal College of Music and Conservatorium van Amsterdam graduating with first class honours. He immediately went on to become the first solo guitarist to be selected by YCAT and was the first guitarist to be awarded a Junior Fellowship at the RCM, where he completed his Masters with distinction.

Since winning first prize in the 2002 National Guitar Competition in Mexico Morgan has appeared as soloist in over fifteen different countries. Recent engagements include concertos with the Royal Philharmonic and Hallé Orchestras and performances with O Duo, Carlos Bonell and the Sacconi Quartet in the UK, Switzerland, Paris, Ireland and Mexico. In 2008 Morgan returns to the Wigmore Hall and appears at Mexico City Festival with Machaca, an international ensemble he founded in 2006, whose first recording was released at the South Bank in 2007 as part of the La Linea Latin American Festival.