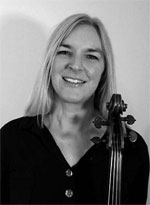 Emma learned the violin and viola with David Hadwen and then went on to study at the Royal Academy of Music with Ian Jewel and Martin Outram. After graduating in 1994 she followed a freelance career combining performing with instrumental teaching. She has toured nationally with many ensembles including the orchestra of the Rambert Dance Company, the English Chamber Orchestra and the Belmont Ensemble of London, where she was principal viola. With the Enigma String Quartet she recorded a series of albums for Oxford Classics, including repertoire by Mozart, Haydn, Beethoven and Schubert. She has held teaching positions at several London schools including St Paul’s Cathedral School and Highgate School.

Emma works closely with Oliver on his album projects and commissions. In pre-production, she and Oliver discuss both the aesthetic and practical elements of his compositions. She often records layers of violin and viola lines, tracked up so that he can gauge how an idea might sound when played live by an orchestra. When not playing the violin or viola, or listening to Oliver’s music Emma enjoys indulging her passion for all things Italian!