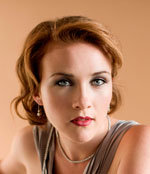 Grammy Award-winning mezzo-soprano Sasha Cooke has been called a ‘luminous standout’ (New York Times) and ‘equal parts poise, radiance and elegant directness’ (Opera News). Ms Cooke is a renowned interpreter of Mahler, whose works she has sung to great acclaim on four different continents. She is sought after by the world’s leading orchestras, opera companies and chamber music ensembles for her versatile repertoire and commitment to new music.

Highlights of Ms Cooke’s career include a European Tour of Mahler’s third symphony with the San Francisco Symphony, Berlioz’s Les nuits d'été in Lucerne and Tokyo, and the world premieres of Mark Adamo’s The Gospel of Mary Magdalene as the title role for her San Francisco Opera debut, Laura Kaminsky’s As One at the Brooklyn Academy of Music, Joby Talbot’s Everest with The Dallas Opera, Marc Neikrug’s Canta-Concerto with the New York Philharmonic, and Kevin Puts’ Of all the moons in recital with Julius Drake at Carnegie’s Zankel Hall.