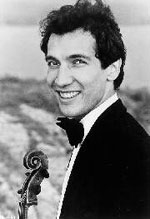 His discography includes over 30 CD’s and have won International awards and prizes. Chief among them is Hyperion's English Music for Viola. On DVD, Coletti’s The Last Typhoon has reached No.1 in the Japan charts. He has directed music videos with many personalities including Star Trek’s Leonard Nimoy. His compositions have been heard worldwide and are published by Oxford University Press.

On the podium Coletti has conducted the New Japan Philharmonic in Tokyo. As a television personality Coletti is producer of The Viola Show and is a frequent guest on Classical Arts, CNN, and NHK. His radio appearances are heard regularly throughout the world, including the BBC, and National Public Radio. Paul Coletti has been featured in articles in the Strad and Strings.

Paul Coletti, born in Edinburgh to Italian parents, has lived in the USA for over 20 years. He studied at the International Menuhin Music Academy with Alberto Lysy, Sandor Vegh and Lord Yehudi Menuhin, and continued at the Juilliard School in New York with Dorothy Delay and Felix Galimir. He was appointed Head of Strings at the University of Washington at age 25. He has given Master classes on 5 continents. Many of his students have international careers as soloists, professors, orchestra principals, and President of the American Viola Society.

After 14 years living in Manhattan, Mr Coletti moved to Los Angeles where he is a teacher at the Colburn School and also Head of Chamber Music at the University of California, UCLA.