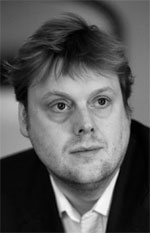 Benjamin is the youngest of fourteen and as a child sang in the Family Choir. After a spell in the wine trade, Benjamin won a scholarship to study at the Guildhall School of Music and Drama and then went on to sing roles Scottish Opera, Welsh National Opera, Nationale Reisopera, The Royal Opera, English Touring Opera, Opera de Lausanne, The Royal Danish Opera, Dijon Opera and at Garsington Opera.

On the concert Platform, Benjamin has performed with Bach Collegium Japan under Mazaaki Suzuki, The English Concert with Harry Bickett, The Royal Northern Sinfonia with Paul McCreesh and with The Stavanger Symphony Orchestra under the direction of John Butt.

Benjamin has sung at many of the notable festivals including The Three Choirs Festival, London Handel Festival, the Northlands Festival, Aix en Provence, Canterbury and The Perth International Festival in Australia. Benjamin lives in Kent with his wife and two children and is a keen cricketer and tennis player and wine aficionado.