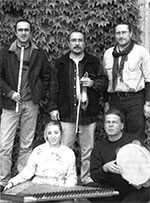 The group's name 'Sarband' stems from the Persian and Arabic languages, and means an improvised connection of two parts within a musical suite. Vladimir Ivanoff founded the ensemble in 1986 and has been pursuing an archaeology of complex connections ever since: Above all, 'Sarband' endeavours to explore and demonstrate connections between the music cultures of Islam. Christianity and Judaism. Both sensitively and intensely Sarband celebrates the symbiotic relationship between Orient and Occident.

The continuous musical collaboration within the Ensemble ensures that a dialogue on equal terms is maintained. It is the exchange of practical musical experience between musicians from different cultures that make the performances of Sarband gripping, lively and utmost authentic.

Sarband's unique repertoire has won them wide acclaim internationally. In the past two decades, the ensemble has performed at numerous international festivals and recorded 15 albums.

Sarband's musicians do not see their work as something sporadic but as a part of being and living. Just as religious. economic, cultural and political differences between Orient and Occident play a predominant role in today's society, Sarband's music endeavours to show that music has always served as communication in which people found reciprocal respect for each other and could easily contribute in the process of relating in the same way today. Uniting people around the world, offering mutual recognition towards each other, in other words: music as an example for peace.