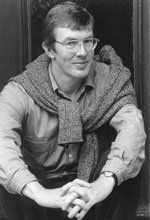 Alfred Brendel has described Kinderman as 'a very rare bird' on account of his ability to combine performance and scholarship. To German critic Gerd Kowa, Kinderman is 'a herald of Beethoven research and interpretation—a sovereign artist'. Edward Rothstein, commenting on the Beethoven Workshop which Kinderman held with Alfred Brendel at Carnegie Hall in 1993, wrote in The New York Times of his 'impressive bursts of intellectual energy and distinctive insight'. Kinderman has given numerous piano and lecture recitals in Canada, the USA and Europe, and is also known for his writings on music, including four books on Beethoven: Beethoven's 'Diabelli' Variations (1987), ed., Beethoven's Compositional Process (1991), the comprehensive monograph Beethoven (1995), and the three-volume study Artaria 195: Beethoven's Sketchbook for the Missa solemnis and the Piano Sonata in E Major, Opus 109.