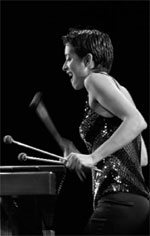 see also Simone Rebello (bass drum)
Simone graduated with Distinction from the Royal Northern College of Music to embark on a solo career that has seen her recording three solo albums, touring extensively nationally and internationally, appearing on UK and international television and radio and winning a collection of awards and prizes including the Cosmopolitan Woman of the Year in Performing Arts. Simone works frequently as a concerto soloist with wind orchestras and brass bands around the world.

She is a founder member of the highly successful Back Beat Percussion Quartet who frequently tour and record internationally and have won a number of chamber music competitions in the UK, Japan and USA including the Concert Artists Guild which lead to a performance at The Weill Hall at Carnegie Hall.

Simone works as a solo recitalist with Julian Wilkens (piano/organ) and with Equivox Trio (percussion, saxes and piano) whose debut album The Time is Now was released to critical acclaim in 2006. In addition to performing Simone is frequently asked to adjudicate various international music competitions and festivals and to present concerts and talks / lectures featuring all aspects of playing percussion.