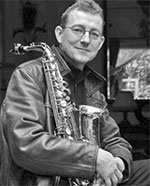 Gerard McChrystal comes from Derry, N.Ireland. He took up the saxophone in 1982 and by 1989 had already performed concertos with The Philharmonia, London and the RTE Concert Orchestra. Gerard studied at the RNCM, Manchester, Guildhall School of Music & Drama and Northwestern University, Chicago.