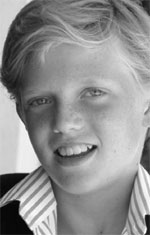 Andrew Swait was born in 1994. From the ages of six to eleven he was a chorister at the Abbey School Tewkesbury, where his life was punctuated with concerts, recordings and, most importantly for Andrew, the daily sung services at Tewkesbury Abbey. In 2005, at the age of ten, he was featured in a TV documentary about his life as a chorister and by the end of that year he appeared for the first time on CD as principal soloist on Light of the World. Upon the very sad closure of the The Abbey School in July 2006, Andrew participated in the Choir’s final CD, Choral Evensong from Tewkesbury Abbey, released in 2006. He acknowledges that all his achievements, present and future, are largely due to the privilege of having had a proper choral training since he began school and he hopes that his work will focus much needed attention on the importance of providing that same opportunity of choral training for other boys.

In July 2006 he was delighted to accept an invitation to record a small part on The King’s Singers’ CD Landscape and Time, which received great acclaim on its release the following year by Signum Records. In September 2006 Andrew was awarded a music scholarship to Cheltenham College Junior, which has supported him since then and where he continues his academic studies and work as a chorister. In October that year he was a finalist in the Chorister of the Year competition and featured in a BBC broadcast from Westminster Abbey. In May 2007 he was invited by Universal Records to join the classical boy-band The Choirboys. Produced by Steve Abbott and under the direction of Martin Neary, their Christmas disc The Carols Album, entered the Classic FM charts at No 7 and was nominated for the Classical Brit Awards, 2008.

Andrew has also been invited to perform as a soloist with the City of Birmingham Choir, Cheltenham Bach Choir, Oriel Singers and Regency Voices. He has performed at Tewkesbury Abbey, Gloucester Cathedral and in Aldeburgh, Beijing, Munich, Krakow and Kiev. In March 2008 he was invited by Deutsche Grammophon to record in Prague with the Russian soprano Anna Netrebko and the Czech Philharmonic and to perform in May 2008, at the Royal Albert Hall for the Classical Brit Awards.