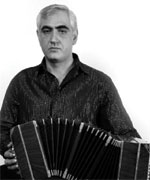 Gevorg is the leading accordionist and the only bandoneon player in Armenia. He received his higher music education at the Culture Department of the Yerevan State Pedagogical University studying accordion and brass instruments and after membership of several well known pop groups was appointed Director of the ‘Akunk’ State Radio Ensemble in 1987.

Gevorg spent ten years accompanying the State Dance Ensemble of Armenia and as a virtuoso accordionist took part in international music festivals in the UK and France. With different ensembles he toured the UK, South Korea, Russia, Lebanon, Turkey, Jordan, Canada, and the UAE, and is involved in numerous recording projects, appearing also in video clips of well-known Armenian instrumentalists and pop singers.

Since 2004 he has been a member of the international orchestra accompanying the great Lebanese singer Fairuz and is a founder member of the Cadence Ensemble.