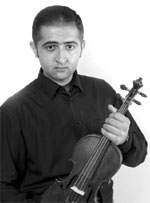 Ashot was born in 1980 in Yerevan, Armenia. Graduating from The Tchaikovsky Music School he received his higher music education as a violinist and composer at the Yerevan State Conservatory (1997-2002, classes of professors Genrikh Smbatian and Edvard Mirzoyan) and has won prizes in three national music competitions.