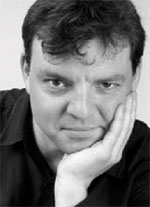 see also Steven Devine (organ)
Conductor and keyboard player Steven Devine received his early musical training at Chetham’s School of Music, Manchester and read music at Oxford University. He is now in demand across the world and is at home in the fields of opera, large-scale concerts, chamber music and solo performances.

Steven is the Co-Principal keyboard player with the Orchestra of the Age of Enlightenment and made his BBC Proms debut with them, directing from the harpsichord. He is also the principal keyboard player for I Fagiolini, Apollo and Pan, The Classical Opera Company and performs regularly with many other groups around Europe. He has recorded over thirty discs with other artists and ensembles and made three solo recordings. In December 2007 Steven took over as the harpsichordist for London Baroque and will be touring Europe and the Far East over the next two years in addition to a busy recording schedule.

Ever since his schooldays, Steven has been associated with the Finchcocks Collection of historic keyboard instruments in Kent and was recently promoted to the post of Director of Education. Steven was appointed Professor of Fortepiano at Trinity College of Music in 2003.