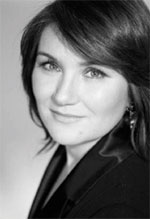 Silvia Tro Santafé was born in Valencia and studied at the Conservatorio Joaquin Rodrigo with Ana Luisa Chova, later studying with Carlo Bergonzi, Walter Berry, Gerard Souzay, Félix Lavilla, Magda Olivero, Monserrat Caballé and Renata Scotto. After her professional debut in La Scala di Seta at the Rossini Opera Festival in Pesaro in 1992 she won a place at the Julliard School in New York and was awarded first prize in the Opera Index Competition.

At the beginning of her operatic career, she was in great demand for Baroque roles and in particular she made a name for singing Handel, with roles in Alcina, Giulio Cesare, and Rinaldo which she performed in such houses as the Opera de Paris, Champs-Elysée and major festivals throughout Europe including Innsbruck and Salzburg. Soon however, she developped a reputation not just as a great Rossini singer but also as a wonderful commedienne. Since then she has been regularly invited to sing Rossini’s Rosina, Cenerentola and L’Italiana (Isabella) in such houses as Vienna, Zurich, Berlin, Munich, Barcelona, Toulouse, Amsterdam and Bologna. In Italy, Silvia has also appeared in Bologna (Barbiere and Giulio Cesare), Rome (Contes d’Hoffman), Venice (Finta Semplice) Bari (Gluck’s Orfeo) and Naples (Scarlatti’s La Vergine dei Dolori).

Among the highlights of recent seasons have been Alcina at the Chatelet, the title roles in L’Enfant et les Sortilèges, Ariodante and Cenerentola in the Liceu Barcelona, Il Barbiere at the Staatsoper in Vienna, Luxembourg and Amsterdam and Rinaldo, Barbiere, and L’Italiana with the Staadtsoper Berlin. Her recent debut, singing Adalgisa to Edita Gruberova’s Norma in Hamburg and Berlin, was a great public and critical success and she has been invited to join Edita Gruberova again for performances of Lucrezia Borgia. Recent work has also included a return to Vienna for L’Italiana, a new Massenet Don Quichotte in Brussels, singing Dulcinée, and L’Italiana at the Teatro Real Madrid.

Silvia has an extensive concert and recital repertoire. Her recording for Globe of Spanish songs was given a top rating by Diapason Magazine. Other recordings include La Verbena de la Paloma with Plácido Domingo, Zerlina in Don Giovanni on Kikko Classics, Serse (Amastre) with William Christie for Virgin and Scarlatti’s Griselda for Harmonia Mundi with René Jacobs.