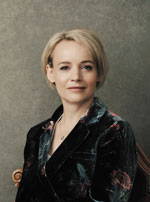 Recently described by The Observer as ‘magnificent, full-toned, flexible, accurate and powerful’, Rachel Nicholls is now widely recognized as one of the most exciting dramatic sopranos of her generation, having come to notice with her highly acclaimed performances as Brünnhilde for Longborough Festival Opera, culminating in complete Ring Cycles in 2013 and Isolde in Tristan und Isolde in 2014.

She has sung a wide repertoire of baroque, classical and contemporary repertorie in opera and concert throughout the UK and Europe, including at the Edinburgh Festival and BBC Proms, and forged a close relationship with Masaaki Suzuki and Bach Collegium Japan, with whom she made several recordings. Other conductors she has worked with include Sir Colin Davis, Sir Andrew Davis, Sir Mark Elder, Sir John Eliot Gardiner, Sir Simon Rattle, Sir Roger Norrington, Richard Hickox, Valery Gergiev, Daniele Gatti and Gianandrea Noseda.

Recent and future engagements include Isolde in Tristan und Isolde for opera companies and in concert performances across Europe and further afield, the title role in Elektra for Theater Basel, Fidelio for Lithuanian National Opera, Guinevere in Harrison Birtwistle’s Gawain for the BBC Symphony Orchestra, Lady Macbeth in Verdi’s Macbeth for the Badisches Staatstheater Karlsruhe and NI Opera, and Eva in Die Meistersinger von Nürnberg for the Badisches Staatstheater Karlsruhe and ENO.

She is also in demand as a concert artist and has worked with orchestras including Bach Collegium Japan, the BBC Symphony Orchestra, Britten Sinfonia, City of Birmingham Symphony Orchestra, London Philharmonic, the Orchestra of the Age of Enlightenment, Philharmonia, the Royal Scottish National Orchestra, the Royal Philharmonic Orchestra, Gulbenkian Orchestra and the BBC Philharmonic Orchestra, with her most recent engagements including Isolde’s ‘Liebestod’ and Elgar’s The Spirit of England with Sir Mark Elder and the Hallé, the premiere of Nicola Lefanu’s The Crimson Bird with the BBC SO, Wagner’s Wesendonck Lieder at the St Endellion Festival, and Verdi’s Requiem at Cadogan Hall. She has performed in recital at various venues including the Wigmore Hall, London.

Rachel was born in Bedford, and in 2013 was awarded an Opera Awards Foundation Bursary to study with Dame Anne Evans.