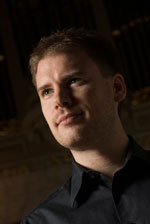 Benjamin Hulett trained as a choral scholar at New College, Oxford, and studied with David Pollard at the Guildhall School of Music and Drama. He was a member of the Hamburgische Staatsoper from 2005 to 2009. He has made debuts at the Bayerische Staatsoper, Deutsche Staatsoper Berlin, Theater an der Wien in the premiere of Kalitzke’s Die Besessenen, the Salzburger Festspiele, Festspielhaus Baden-Baden, and Opera di Roma. In the UK, Benjamin has performed with Glyndebourne Festival Opera, Royal Opera House, Opera North, Grange Park Opera, Opera Holland Park, Garsington Opera and Welsh National Opera, and performed in Sir Jonathan Miller’s staging of the St Matthew Passion at the National Theatre. Benjamin appears regularly at the BBC Proms, and is increasingly in demand as an interpreter of song.

Recent highlights include A Midsummer Night’s Dream at the Wiener Staatsoper, a return to Covent Garden for Die Zauberflöte, Handel’s Saul at the Théâtre du Châtelet, Fidelio at the Theater an der Wien, and a debut with the Hong Kong Philharmonic Orchestra, performing Mozart’s Requiem. Other recent debuts include those with the Los Angeles Philharmonic Orchestra and Charles Dutoit in L’heure espagnole, at Carnegie Hall performing the role of Jupiter in Semele as part of an English Concert tour around the USA and Europe, at the Teatro Real in Madrid as Arbace in Idomeneo, and as David in Die Meistersinger von Nürnberg in concert with the Orchestra dell’Accademia Nazionale di Santa Cecilia and Sir Antonio Pappano.