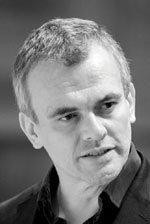 Simon Over studied at the Amsterdam Conservatoire, the Royal Academy of Music and Oxford University. From 1992 to 2002 Simon was a member of the music staff of Westminster Abbey, and Director of Music at both St Margaret’s Church and in the Chapel of St Mary Undercroft in the Palace of Westminster. He is the Founder-Conductor of the UK Parliament Choir and has conducted all the choir’s performances in conjunction with the City of London Sinfonia, La Serenissima, The London Festival Orchestra and Southbank Sinfonia.

Simon founded Southbank Sinfonia in 2002 and has conducted many of its concerts throughout the UK and Europe at St George’s Chapel, Windsor Castle; St James’s Palace; The Royal Opera House, Covent Garden; Westminster Abbey; The Queen Elizabeth Hall and the Royal Albert Hall. He has conducted Southbank Sinfonia in recordings with cellist Raphael Wallfisch, tenor Andrew Kennedy and pianist Alessio Bax. In 2009 and 2010 he conducted the orchestra in 71 performances of Every Good Boy Deserves Favour (Tom Stoppard/André Previn) at the National Theatre, while in 2011 Simon received, on behalf of Southbank Sinfonia, the Japan Art Association Praemium Imperiale Grant for Young Artists in the presence of Prince and Princess Hitachi and HM the Queen.

In 2006, Simon was appointed Conductor of the Malcolm Sargent Festival Choir and has been associated with the Samling—working with young professional singers—since its inception. He is also Artistic Director of the Music Festival in Anghiari (Tuscany) and, since 2010, Music Director of Bury Court Opera for whom he has conducted Dido and Aeneas, Rigoletto, La Cenerentola, Eugene Onegin, The Fairy Queen and The Rake’s Progress. Further credits include Guest Conductor of the City Chamber Orchestra (Hong Kong), the Goyang Philharmonic Orchestra (Korea) and directing Mozart’s Bastien und Bastienne for the 2011 Vestfold International Festival in Norway. Recently appointed Principal Guest Conductor of the Southern Sinfonia, New Zealand, in October 2013, he conducted a joint concert with the Yamagata Symphony Orchestra and the Southern Sinfonia, representing Australia and New Zealand in Tokyo’s Asia Orchestra Week.

As a pianist, his performances with American violinist Miriam Kramer at the Wigmore Hall and Lincoln Center, New York—as well as on several recordings—have received high critical acclaim.