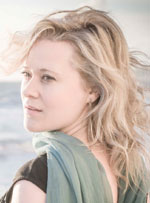 Ilona Domnich is a rising opera star described by critics as a memorable voice of silken beauty with a luminous edge to the tone, a sensitive musician and an actress of magnetic presence. She was chosen by Opera Now as one of its Top 10 high flyers, a new generation of sopranos who are destined to have impressive careers.

Originally a pianist, Ilona was plucked by a legendary singing teacher Vera Rosza during one of her masterclasses. She went on to win the prestigious Wingate Scholarship to study at the Royal College of Music. Her career is growing steadily worldwide.

Ilona’s fruitful collaboration with Southbank Sinfonia and Simon Over, with whom she has performed the Brahms Requiem, Mendelssohn ‘Lobgesang’, Ravel Shéhérazade and the roles of Tatyana and Gilda, led to the creation of this CD. Other symphonic repertoire includes Mahler’s Symphony 2 and 4, Mozart’s C minor Mass, Shostakovich’s Symphony 14, and Dvořák’s Te Deum.