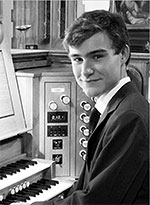 Bertie Baigent is the Junior Organ Scholar and a Music undergraduate at Jesus College Cambridge. He works regularly with the Choirs of Jesus College, playing for services, concerts, and on the choirs’ tours. In June 2014 he was awarded a starred first in his first-year exams, and received the Donald Wort Prize for achieving the highest mark in Music across the University of Cambridge.

Bertie’s compositions have won numerous accolades and awards; these include the BBC Young Composers’ Competition 2013, the Bath Philharmonia Sound Connections Competition 2013, the Ludlow English Song Festival 2013, the Royal Opera House Fanfare Competition 2012, and the National Centre for Early Music Young Composers’ Award 2011. While at school he was a member of the National Youth Orchestra, who performed his works in venues such as the Royal Festival Hall and the Royal College of Music. Two of his compositions have been broadcast on BBC Radio 3, and recent commissions include a fanfare for the Royal Philharmonic Society and an anthem for the Choir of Somerville College, Oxford. His organ work Bright spark, shot from a brighter place will be published in 2015, along with an album including the same work.

As a conductor Bertie studies with Nicholas Cleobury, and has directed performances ranging from baroque orchestral music, through classical and romantic symphonies, to the works of twentieth-century composers such as Bartók and Walton, as well as his own compositions. Most recently he has founded his own ensemble in Cambridge whose inaugural concert featured Wagner’s Siegfried Idyll and Sibelius’s Pelléas et Mélisande and plans to pursue further orchestral and operatic projects during his time as a student in Cambridge.