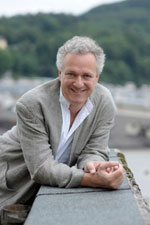 Before concentrating on singing, the Augsburg-born baritone Johannes Martin Kränzle played the violin and studied to be a music theatre director. As a student of Martin Gründler at the Music Academy in Frankfurt am Main, he successfully took part in various singing competitions, before accepting his first engagements in Dortmund and Hannover. Since 1998 he has been a member of the Frankfurt Opera where he sang his first Wolfram (Tannhäuser), Tomsky (Pique Dame), Grjaznoi (Rimsky-Korsakov’s Die Zarenbraut), Heerrufer (Lohengrin), Giovanni Morone (Pfitzner’s Palestrina) and all the important Mozart roles. Here he worked together with directors such as Keith Warner, Christof Loy and Nicolas Brieger.

Guest appearances have taken him to San Francisco Opera (Papageno in Die Zauberflöte and Messiaen’s Saint François d’Assise), Hamburg State Opera (Count in Le nozze di Figaro, Weill’s Mahagonny), Bavarian State Opera (Guglielmo, Papageno, the Secretary in Henze’s The Young Lord), Geneva (Korngold’s Tote Stadt, Eisenstein in Die Fledermaus, Lehár’s The Merry Widow), as well as to the Salzburg Festival (Valens in Theodora, and Nietzsche in the premiere of Dionysos by Wolfgang Rihm). He sang Beckmesser at Glyndebourne Festival Opera under the baton of Vladimir Jurowski, and made his debut as Alberich in Rheingold in a new production of Wagner’s Ring at La Scala in Milan and the Berlin State Opera under Daniel Barenboim.